“An Upside of Fear” by Peggy Robinson (guest blogger) 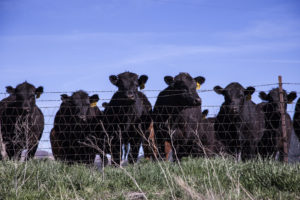 AN UPSIDE OF FEAR
by Peggy Robinson (guest blogger)

I grew up on a farm in Iowa. My dad raised corn, soy beans and cattle. When I was nine years old, my father asked me to begin going out to the pasture behind the house and bring in the cattle. I was reluctant, but started out with some confidence, I had seen him do this. I was about half way out when those full grown black steers looked at me! They were huge! I truly felt I was David facing many Goliaths. I started to cry. I wanted to obey my dad, but these animals scared me to my soul. I slowly walked behind them and began to yell and clap my hands to drive them to the feed lot.

My crying must have sounded more like howling. I was later told that the two elderly neighbor ladies who lived on the corner had been sitting in their rocking chairs on the porch. Hearing my cries, they had called my parents and asked why they were torturing their daughter.

Eventually the cattle moved with my noisy prodding. But it didn’t end there. I had to do that many days that summer. I didn’t stop being scared. Less scared, but still scared.

Years later I was relating that fearful experience to my dad. He replied “You were quite protected here by your mom and me. It was time you began to learn to do some hard things. You were my child and I saw that you needed some strength to be built in you. Most importantly, I was watching you the entire time. I wouldn’t send you some place where you would be harmed! You know how much I love you.”

I didn’t know. A relief came over me, even those years later. To realize that as those big steers’ eyes were on me, my dad’s protective eyes were on me the whole time.
Now I’m older and I’ve learned that to “feel the fear and do it anyway” is a good motto. My Heavenly Father’s eyes are on me the whole time. He would not direct me to the “valley of the shadow of death” alone. For even there He is with me.

In your next fearful experience, may you remember that He has promised never to leave you or forsake you.

(Peggy Robinson is the author of two books, a collection of Christmas stories called “The Wonders of Christmas” and “My Journey through Chronic Pain.” You may order through Amazon or email her at ppjrmsw@aol.com.)