“Barrington Bunny” from The Way of the Wolf by Martin Bell 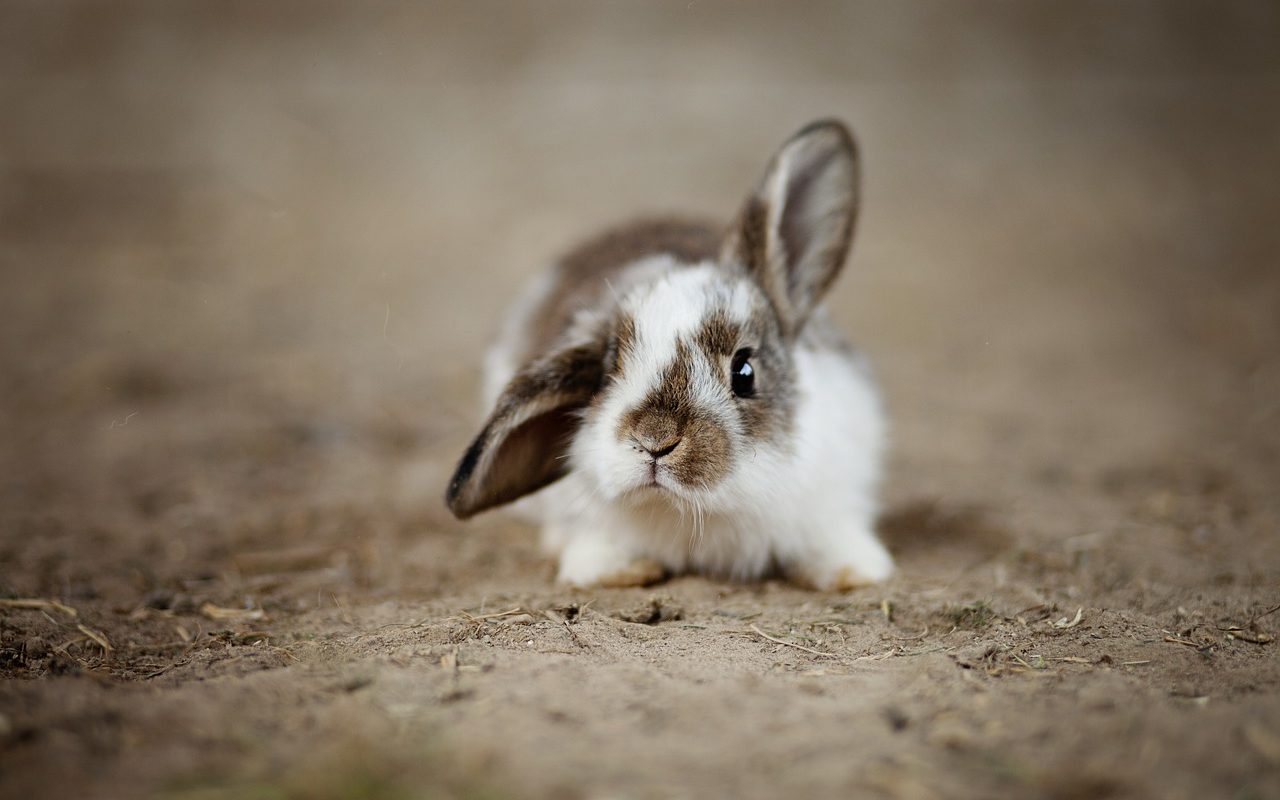 Once upon a time in a large forest there lived a very furry bunny. He had one lop ear, a tiny black nose, and unusually shiny eyes. His name was Barrington.

Barrington was not really a very handsome bunny. He was brown and speckled and his ears didn’t stand up right. But he could hop, and he was, as I have said, very furry.

In a way, winter is fun for bunnies. After all, it gives them an opportunity to hop in the snow and then turn around to see where they have hopped. So, in a way, winter was fun for Barrington.

But in another way winter made Barrington sad. For, you see, winter marked the time where all of the animal families got together in their cozy homes to celebrate Christmas. He could hop, and he was very furry. But as far as Barrington knew, he was the only bunny in the forest.

When Christmas Eve finally came, Barrington did not feel like going home all by himself. So he decided he would hop for awhile in the clearing at the center of the forest.

Hop. Hop. Hippity-hop. Barrington made tracks in the fresh snow.

Hop. Hop. Hippity-hop. Then he cocked his head and looked back at the wonderful designs he had made.

“Bunnies,” he thought to himself, “can hop. And they are very warm, too, because of how furry they are.”

(But Barrington didn’t really know whether or not this was true of all bunnies, since he had never met another bunny.)

When it got too dark to see the tracks he was making, Barrington made up his mind to go home.

On his way, however, he passed a large oak tree. High in the branches there was a great deal of excited chattering going on. Barrington looked up. It was a squirrel family! What a marvelous time they seemed to be having.

“Hello, up there,” called Barrington.

“Hello, down there,” came the reply.

“Having a Christmas party?” asked Barrington.

“Oh, yes!” answered the squirrels. “It’s Christmas Eve. Everybody is having a Christmas party!”

“May I come to your party?” said Barrington softly.

“Are you a squirrel?”

“Well, how can you come to the party if you’re a bunny? Bunnies can’t climb trees.”

“That’s true,” said Barrington thoughtfully. “But I can hop and I’m very furry and warm.”

“We’re sorry,” called the squirrels. “We don’t know anything about hopping and being furry, but we do know that in order to come to our house you have to be able to climb trees.”

And the unfortunate bunny hopped off toward his tiny house.

It was beginning to snow when Barrington reached the river. Near the riverbank was a wonderfully constructed house of sticks and mud. Inside there was singing.

“It’s the beavers,” thought Barrington. “Maybe they will let me come to their party.”

And so he knocked on the door.

“Who’s out there?” called a voice.

There was a long pause and then a shiny beaver head broke the water.

“May I come to your Christmas party?” asked Barrington.

The beaver thought for awhile and then he said, “I suppose so. Do you know how to swim?”

“No,” said Barrington, “but I can hop and I am very furry and warm.”

“Sorry,” said the beaver. “I don’t know anything about hopping and being furry, but I do know that in order to come to our house you have to be able to swim.”

“Merry Christmas,” called the beaver. And he disappeared beneath the surface of the water.

Even as furry as he was, Barrington was starting to get cold. And the snow was falling so hard that his tiny, bunny eyes could scarcely see what was ahead of him.

He was almost home, however, when he heard the excited squeaking of field mice beneath the ground.

“It’s a party,” thought Barrington. And suddenly he blurted out through his tears, “Hello, field mice. This is Barrington Bunny. May I come to your party?”

But the wind was howling so loudly and Barrington was sobbing so much that no one heard him.

And when there was no response at all, Barrington just sat down in the snow and began to cry with all his might.

“Bunnies,” he thought, aren’t any good to anyone. What good is it to be furry and to be able to hop if you don’t have any family on Christmas Eve?”

Barrington cried and cried. When he stopped crying he began to bite on his bunny’s foot, but he did not move from where he was sitting in the snow.

Suddenly, Barrington was aware he was not alone. He looked up and strained his shiny eyes to see who was there.

To his surprise he saw a great silver wolf. The wolf was large and strong and his eyes flashed fire. He was the most beautiful animal Barrington had ever seen.

For a long time the silver wolf didn’t say anything at all. He just stood there and looked at Barrington with those terrible eyes.

Then slowly and deliberately the wolf spoke. “Barrington,” he asked in a gentle voice, “why are you sitting in the snow?”

“Because it’s Christmas Eve,” said Barrington, “and I don’t have any family, and bunnies aren’t any good to anyone.”

“Bunnies are, too, good,” said the wolf. “Bunnies can hop and they are very warm.”

“What good is that?” Barrington sniffed.

“It is very good indeed,” the wolf went on, “because it is a gift that bunnies are given, a free gift with no strings attached. And every gift that is given to anyone is given for a reason. Someday you will see why it is good to hop and to be warm and furry.”

“But it’s Christmas,” moaned Barrington, “and I’m all alone. I don’t have any family at all.”

“Of course you do,” replied the great silver wolf. “All of the animals in the forest are your family.”

And then the wolf disappeared. He simply wasn’t there. Barrington had only blinked his eyes, and when he looked-the wolf was gone.

“All of the animals in the forest are my family,” thought Barrington. “It’s good to be a bunny. Bunnies can hop. That’s a gift.” And then he said it again. “A gift. A free gift.”

On in the night Barrington worked. First he found the best stick he could. (And that was difficult because of the snow.)

Then hop. Hop. Hippity-hop. To beaver’s house. He left the stick just outside the door. With a note on it that read: “Here is a good stick for your house. It is a gift. A free gift. No strings attached. Signed, a member of your family.”

“It is a good thing that I can hop, he thought, “because the snow is very deep.”

Then Barrington dug and dug. Soon he had gathered together enough dead leaves and grass to make the squirrels’ nest warmer. Hop. Hop. Hippity-hop.

He laid the grass and leaves just under the large oak tree and attached this message: “A gift. A free gift. From a member of your family.”

It was late when Barrington finally started home. And what made things worse was that he knew a blizzard was beginning.

Soon poor Barrington was lost. The wind howled furiously, and it was very, very cold. “It certainly is cold,” he said out loud. “It’s a good thing I’m so furry. But if I don’t find my way home pretty soon I might freeze!”

And then he saw it-a baby field mouse lost in the snow. And the little mouse was crying.

“Don’t cry. I’ll be right there.” Hippity-hop, and Barrington was beside the tiny mouse.

“You won’t freeze,” said Barrington. “I’m a bunny and bunnies are very furry and warm. You stay right where you are and I’ll cover you up.”

Barrington lay on top of the little mouse and hugged him tight. The tiny fellow felt himself surrounded by warm fur. He cried for awhile but soon, snug and warm, he fell asleep.

Barrington had only two thoughts that long, cold night. First he thought, “It’s good to be a bunny. Bunnies are very furry and warm.” And then, when he felt the heart of the tiny mouse beating regularly, he thought, “All the animals in the forest are my family.”

Next morning, the field mice found their little boy, asleep in the snow, warm and snug beneath the furry carcass of a dead bunny. Their relief and excitement was so great that they didn’t even think to question where the bunny had come from.

And as for the beavers and the squirrels, they still wonder which member of their family left the little gift for them that Christmas Eve.

After the field mice had left, Barrington’s frozen body simply lay in the snow. There was no sound except that of the howling wind. And no one anywhere in the forest noticed the great silver wolf who came to stand beside that brown, lop-eared carcass.

But the wolf did come.

And he stood there.

Without moving or saying a word.

Until it was night.

And then he disappeared into the forest.